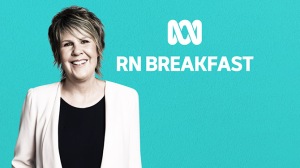 For the past few months I’ve been getting up early to talk sport on Radio National’s breakfast programme.

It’s not a permanent gig – I’ve been subbing in for their normal sports guru Warwick Hadfield, who is away on an extended break – but it’s been an interesting period to be covering sport.

Over the past month the Women’s Football World Cup, the Cricket World Cup and Wimbledon have all provided plenty of storylines.

Australia’s female athletes (think Ash Barty, Sally Fitzgibbons and Hannah Green) have had a golden run, while our traditional three winter footy codes have been producing their own fare share of headlines. Then there’s been the ongoing controversy surrounding the Israel Folau sacking.

Sometimes I’ve got so much to talk about I’ve jumped on-air at Radio Sydney too, to talk sport with the breakfast show hosts there as well.

But there have been other highlights to this new gig, too. RN Breakfast is one of Australia’s most popular morning radio shows and it’s not too hackneyed to say that it often does “set the news agenda” for the day. It’s no surprise really when you see the interviewing skills of presenter Fran Kelly and her very able stand-in Hamish Macdonald.

The guests the show manages to attract are really pretty impressive. The biggest names often seem to be scheduled just after my second sports chat at 730am. Over the last month I have kept the Federal Treasurer, the Finance Minister and the former Deputy PM, plus a few senators, waiting on the phone line, while I lumber through my list of sporting results.

I like to think that I’ve equipped our nation’s leaders with a few bits of sporting trivia before they head out for the day to meet their constituents.