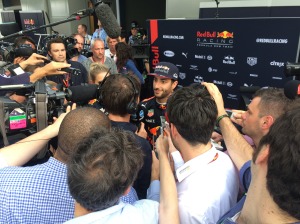 These last few days I have been reporting for dpa at the first race of the new Formula One season, the Australian Grand Prix at Melbourne’s Albert Park.

What an experience. The glamour, the technology, the extravagance and THE NOISE … it is one heady cocktail.

Each day brings a new story. Today, German driver Pascal Wehrlein has withdrawn from the race, just ahead of the third practice session and qualifying, which won’t help his Sauber team in their preparations.

As a reporter, it is always a privilege to get so close to the action. One thing that has really blown me away here is the enthusiasm of the fans for their racing heroes, something that I have never seen first hand.

People lean all day against the barriers at the entrance to the race paddock (the area behind pit lane where drivers mingle with media and overdressed important people), calling out the drivers’ names.

The name on everyone’s lips is, as expected, local favourite Daniel Ricciardo, who obliges with giving as many signatures and selfies as he can. He’s also pretty popular with the journalists too, as the above photo shows.