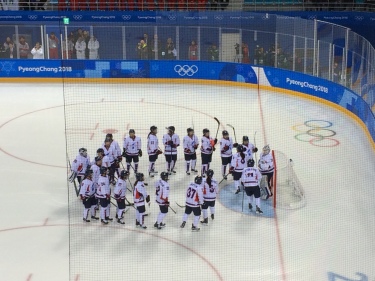 It’s not often that you get to see world class sport mixed with daily political intrigue – but that’s what seems to be served up each day at this year’s Winter Olympics in Pyeongchang.

I am covering the event here in South Korea until February 25 for dpa and so far it really feels like the world’s eyes are watching the daily events here in South Korea. Many of the athletes have already sensed this too, I think.

From North Korean cheerleaders to historic handshakes (and political snubbings), these Games have already stolen international headlines a few times even before the competition started.

On the slopes and on the rink, what strikes me so far about Olympic competition is the incredible randomness of success versus failure. A wayward ski, a missed shot, a bumpy corner and already your Olympic dreams are over. It must be so tough for the athletes – before you even know that you have made a mistake you are already out of contention. So much depends on luck and yet many of them stay so calm. They are a real credit to their countries.

Still, the long days here aren’t all political musings and philosophical thoughts on achievement, there are many banal aspects of spending three weeks in the South Korean countryside, reporting on winter sport. A few observations from me so far, in no particular order:

– South Korea is even colder than people said it was going to be.

– Road rules are fluid. Especially on the issue of right of way and parking at intersections.

– People are very kind, and helpful, even if they sometimes don’t understand what you are saying.

– Chicken forms the basis of many a restaurant menu.

– Signage can be very detailed, but at the same time not very clear.

– There is apparently no upper limit on how much you can look at your smartphone, while still surviving as a human.