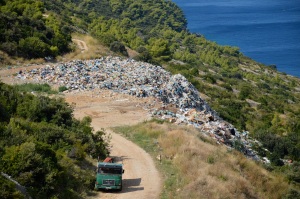 There’s nothing like getting away from the desk job and discovering somewhere new. Especially if you are on holiday and actually have some time to slow down, look around you and take some notice. With my better half, we opted to visit the Croatian island of Vis for the first time. How we got there is a weird story, but that – as Ofelia Harms would say – is not the point. It was beautiful, sunny and almost empty of tourists. Visiting the island’s stunning beaches and trying the local seafood for a week was an experience I will never forget. My God, there is even a cricket club on this island: the place really was “a dream come true.” But, the island holds a dirty secret. It dumps its rubbish off a cliff, into an area just a few hundred meters from the pristine waters of it’s beautiful coastline. The dump looks like it is becoming an ever-expanding area. The site is in clear view of a main road, easily visible to passers-by. When it rains and storms on Vis, I would expect that contaminated run-off from the area flows down into the sea. I know, from my time on the environment desk, that dealing with rubbish on a small island is very difficult. There is little space to build appropriate recycling facilities and moving it somewhere else is costly. Burning it is bad for the locals and burying it on Vis, an island almost made entirely of rock, would be bloody hard work. 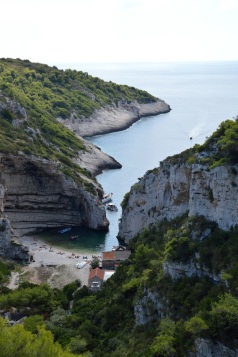 Also, it’s clear after five minutes on Vis, that the island is not wealthy, so dealing with these sorts of problems may be at the end of a long “to do” list. But still, I hope that efforts are being made to deal with rubbish from the island containing heavy metals, or other pollutants that are hard to break down.

I didn’t have time to ask anyone there about this (I was on holiday after all!). If the island really wants to live up to its sustainable image, it’s something it needs to address.

Still, don’t get me wrong: long live Vis! What a place.